The Manufacturing Process of the Surgical Gown

The manufacturing process of the surgical gown in the robe type mainly includes processing the non-woven fabrics that meet the protection requirements by techniques such as cutting, stitching, tightening, bonding, gluing, and sterilizing.

The Sewing Technique in the Manufacturing Process of Surgical Gown

Sewing is the process of turning pieces into a whole, during which the ordinary sewing process can be adopted. The neck part of the surgical gown has a protective collar that allows the operator's neck to be heated and protected. With the added hand protector, the surgeon can put his hands on it temporarily during the operation and it can play a protective role, which is more in line with the principles of aseptic operation and occupational protection. The waist part of the sleeve of the surgical gown has elastic bands, preventing gloves from slipping during operation and avoiding exposing operators' hands to bacteria.

The Heat Sealing Technique in the Manufacturing Process of Surgical Gown

The surgical gown for sale at Longhui Medical can effectively reduce the risk of medical staff having contact with pathogenic microorganisms and also reduce the risk of transmission of pathogenic bacteria between medical staff and patients. It acts as a safety barrier in sterile areas during surgery. Therefore, it is necessary to seal the needle eye produced after sewing the joint parts with the equipment called the hot air seam sealing machinery. According to different parts of the protective gown, different thickness and sewing requirements, the conditions of the heat sealing machine can be set, and the adhesive parts of the heat sealing machine can be alloted.

The Sterilization Technique in the Manufacturing Process of Surgical Gown 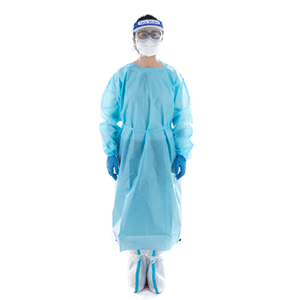 Welcome your presence, you can send us an email, we will get in touch with you within 24 hours.